Grand brands do it, online stores do it, even small ventures do it - everyone cooperates with opinion leaders to promote their business. And that’s the way to go!

According to recent study by Nielsen (American global company for big data and marketing research), 92% of customers tend to trust recommendations from friends or celebrities more than any other kind of advertisement. Moreover, 75% of buyers rely on information from social media.

Today, 67% of western marketing specialists closely interact with influencers and challenge deals aimed at promotion of products and services

Instagram had 4.2 billion posts daly in the last year. In these 12 months search for ‘influencer marketing’ in Google increased by 325%.

Growth of advertising in Instagram led a great number of brands to spending money on opinion leaders. Influencers win trust creating useful and memorable content. When users feel that recommendation is safe and trustworthy, they follow it and make a purchase.

Today, bloggers, aka trendsetters, aka influencers or opinion leaders are no longer just people with popular Instagram and Facebook accounts. The make a powerful communication channel used by modern comalies to draw attention of a vast audience. Communicating with customers through celebrities, brands become closer to their target audience.

Ukrainian companies make no exception. The scale of interaction between Ukrainian leading brands and influencers is really impressive. Let’s take look at the most interesting cases.

NYX often cooperates with beauty bloggers and makeup stylists, initiates contests and ‘giveaways’. There is plenty of posts and stories under #nyxcosmetics and #nyxukraine with the number of views and likes getting sky high. For instance, the ‘giveaway’ from Ania Markovich (digital infkuencer, 100K followers) gathered 7949 likes. 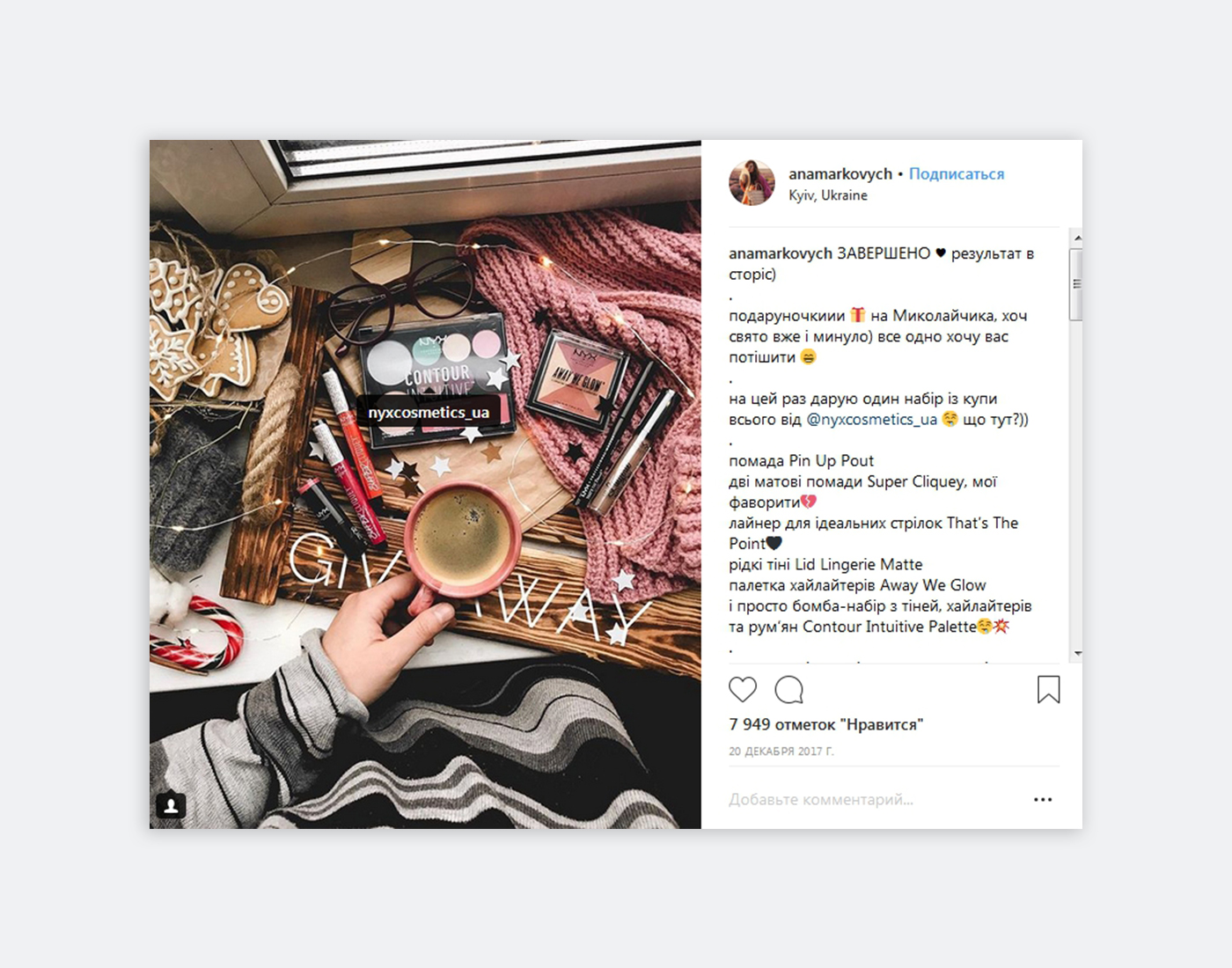 The Beauty Blogging Academy, special project from NYX Professional Makeup together with Air academy, is the unconventional way of cooperation with opinion leaders. Beginning beauty-, fashion- and lifestyle bloggers had two weeks of intensive training form one of the leading YouTube schools. Diana Gloster and Masha Oz - top Ukrainian beauty bloggers of YouTube and Instagram - participated in the project. 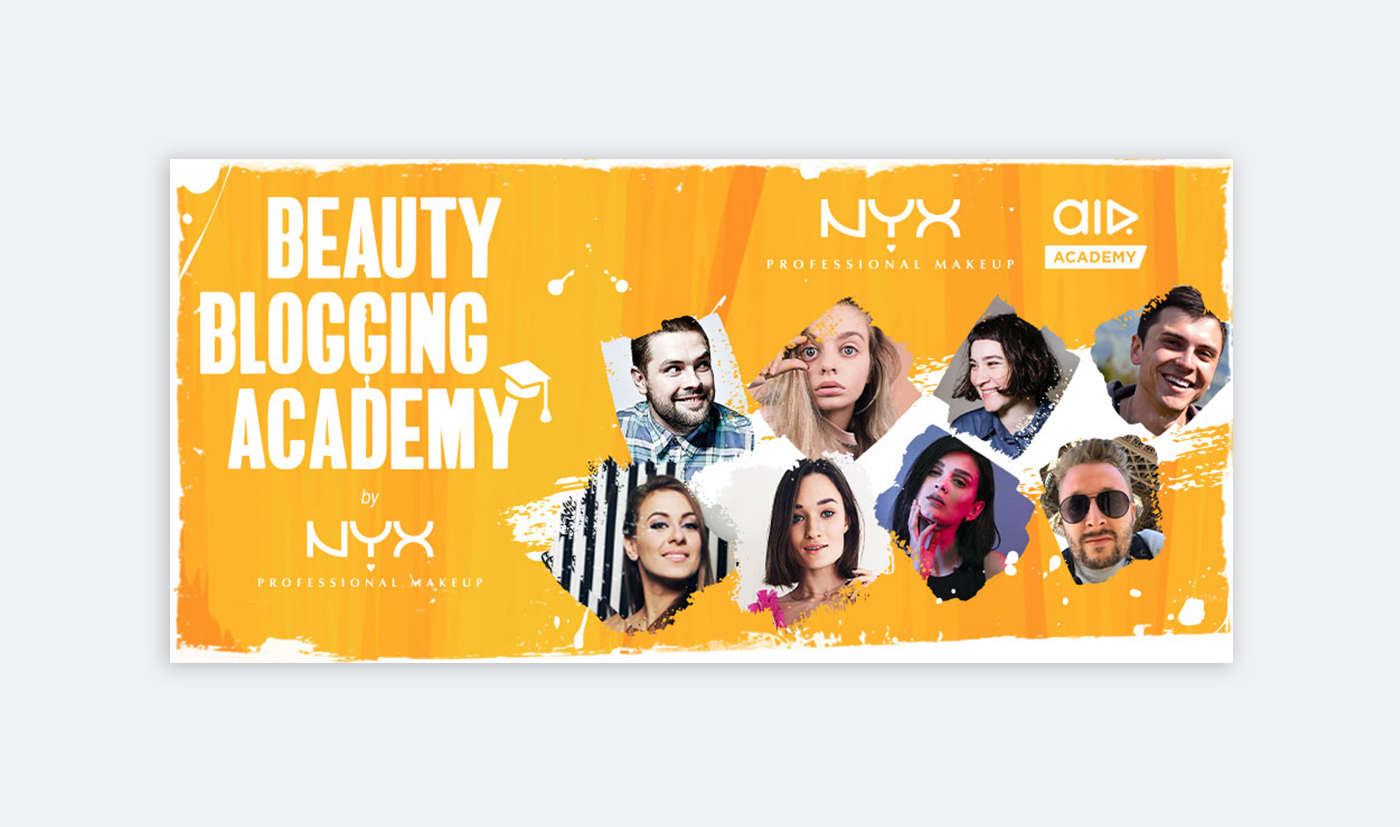 In the context ‘In Style With Nadia Dorofeeva’ advertising campaign for Maybelline Colossal Big Shot mascara 5 videos were shot and cut in New York. Together they gained 2.5 million views.

As a part of ‘City Life Makeup’ campaign Nadia Dorofeeva together with other bloggers and a team from Maybelline New York Ukraine launched a project to inspire millions of young women to look impeccable in everyday situations. Overall 3,919,000 views in under 2 months.

Project ‘Citrus Experiments’ engaged Andrei Nemodruk from the ‘ND Production’ channel. Since the launch of the channel Andrew and his team shot multiple parodies, sketches and funny clips. They had millions of views from over 2,000,000 subscribers.

‘Citrus Experiments’ was a series of test drives and trials for newest trendy gadgets with original experiments and burst of emotions from ND Production. 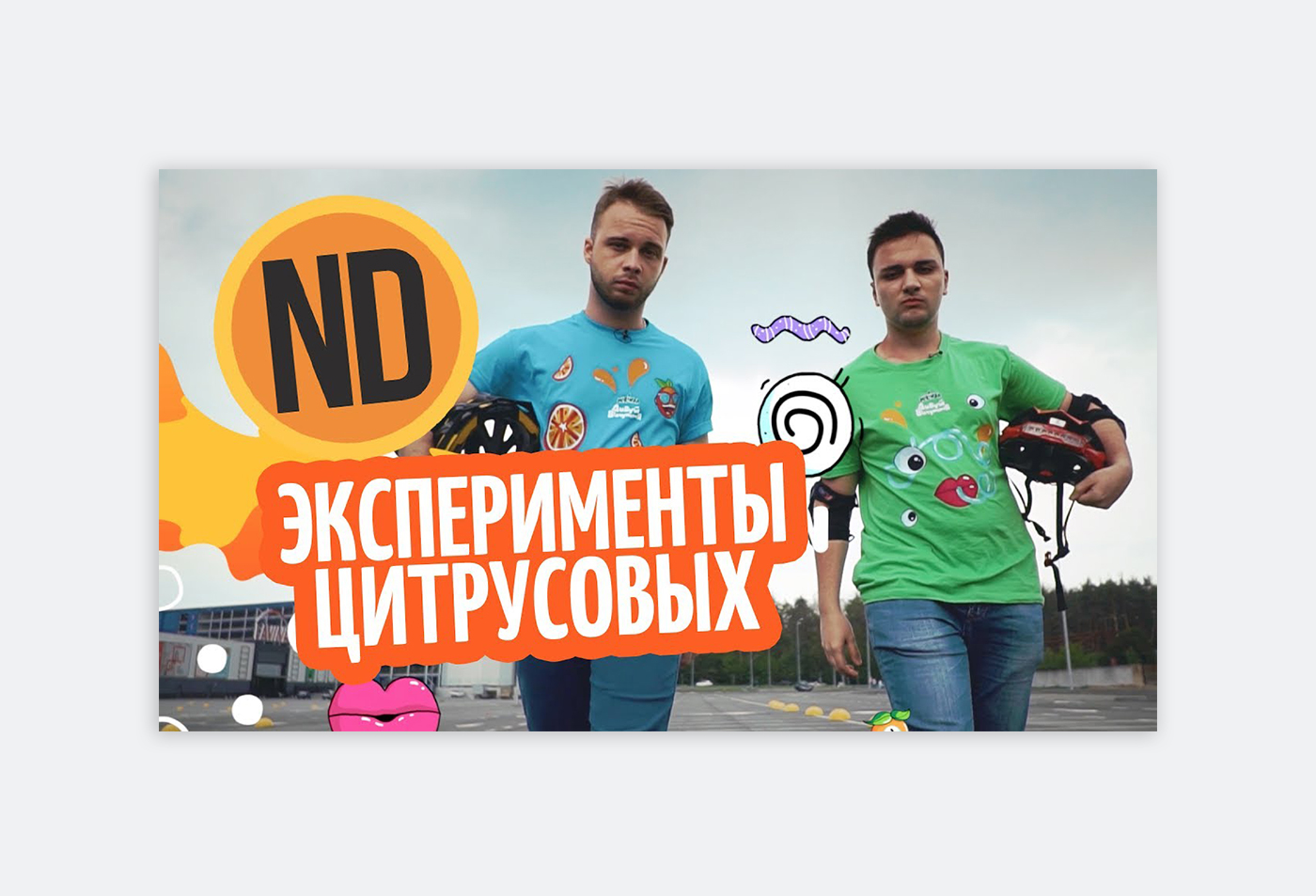 In the context of advertising campaign for Sandora Fruitz the ‘juicy’ brand arranged a #FruitzRunners zorbing race. Sasha Ozolin, Valada Garmash & Roma Oleshuk, famous bloggers and participants of the #VideoZhara2018 fest raced in branded zorbs from Sandora Fruitz which coloured as cranberry, orange and lemon.

The aim of the #FruitzRunners event was to give fresh emotions to the audience and add a twist to summer days. 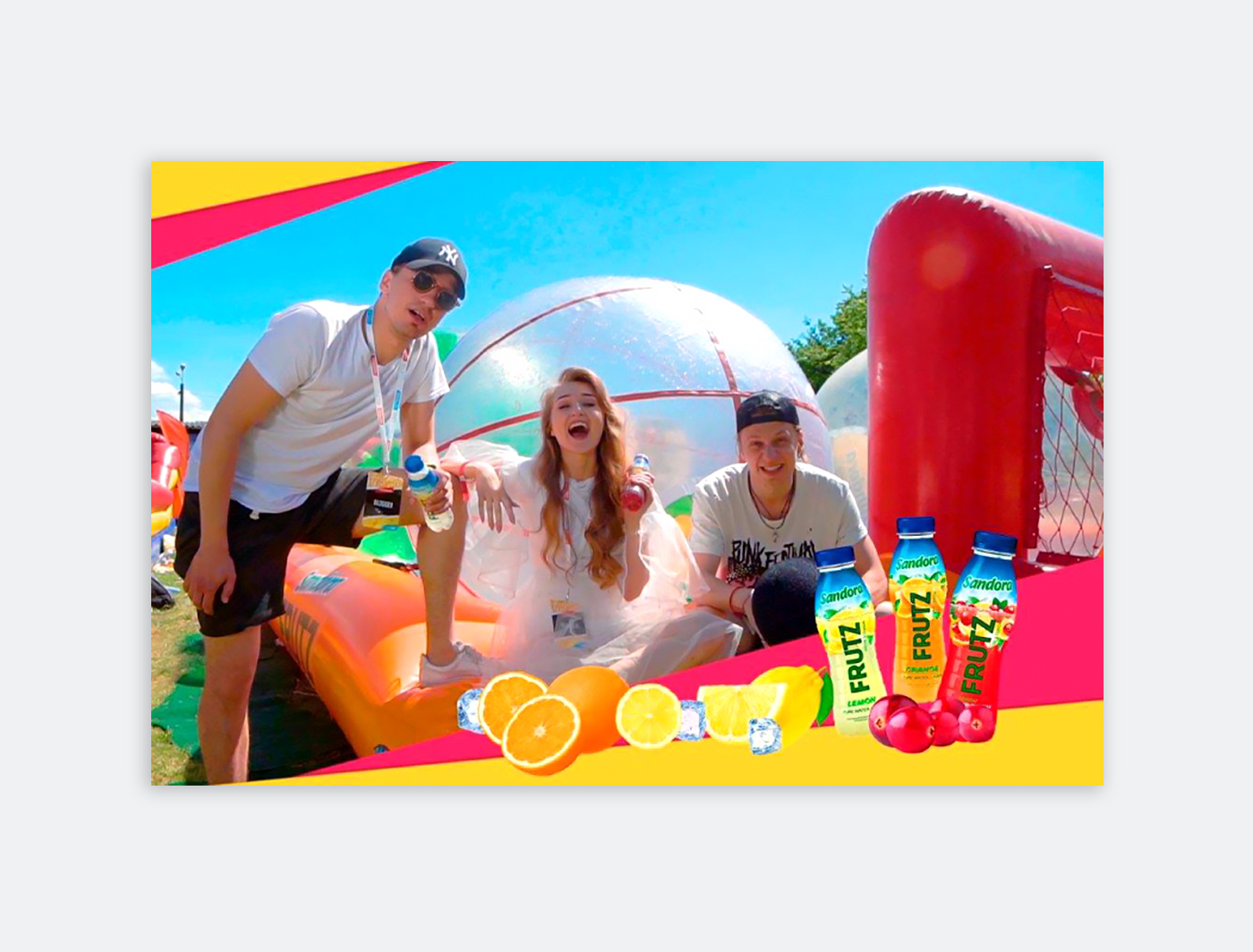 The MaxFactor brand invited three famous bloggers: Ilonkis, Alina Frendii and Sofia Stuzhuk - to speak about the one advantage that they think makes them confident and different from others. The girls shared these factors at the photo shoot and later published the pictures and interviews under #myfactor. Quite soon many other beauty bloggers and pretty ladies joined the flashmob focused on individual uniqueness of every woman. 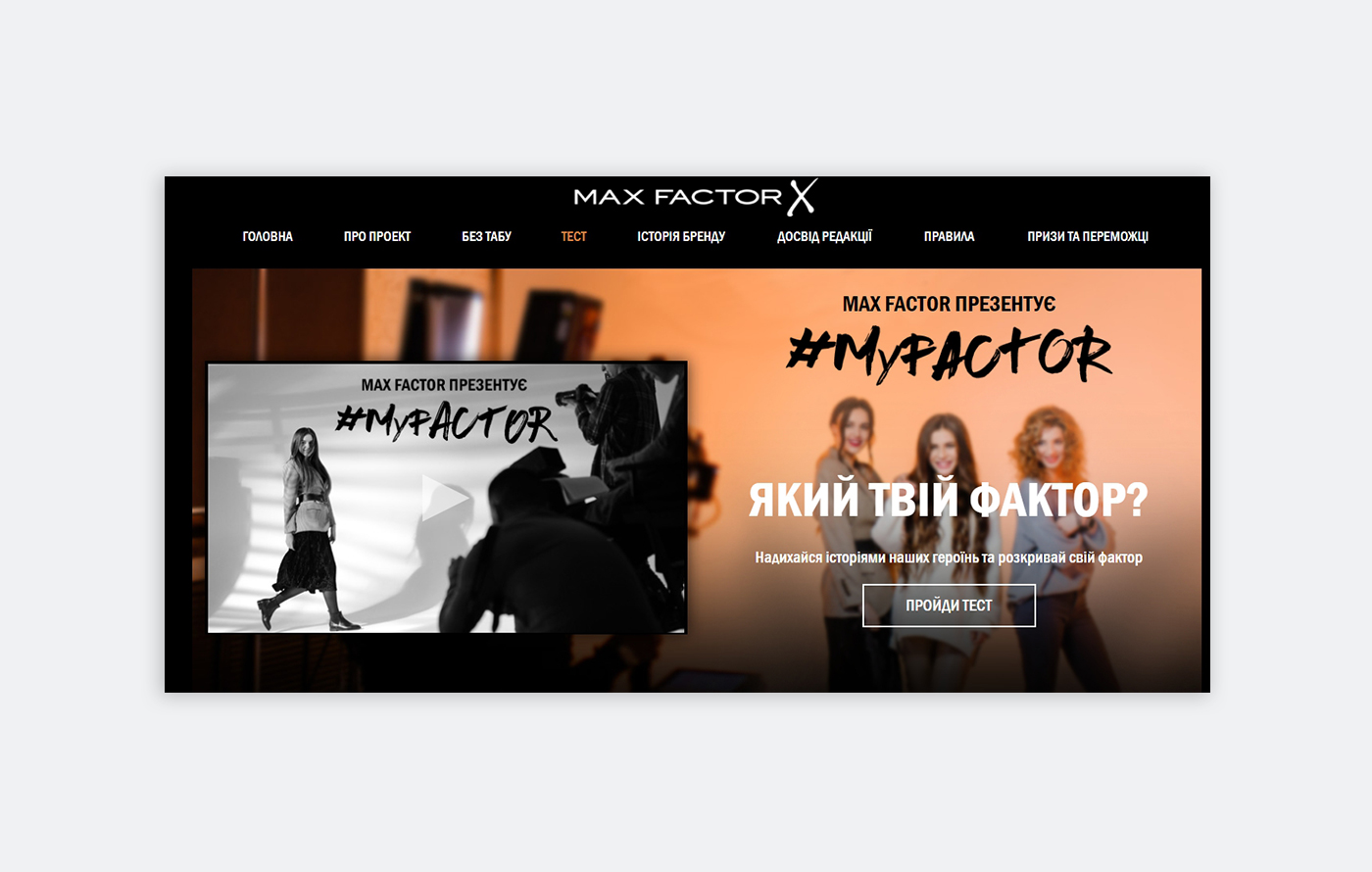 Nivea gathered hundreds of touching stories under #sorryforthewrinkles as a part of their advertising campaign for the anti-aging Cellular series. Nivea’s intention was to give a chance to remember moment of disturbance, say ‘sorry’ to our mothers and thank them for endless support and love. 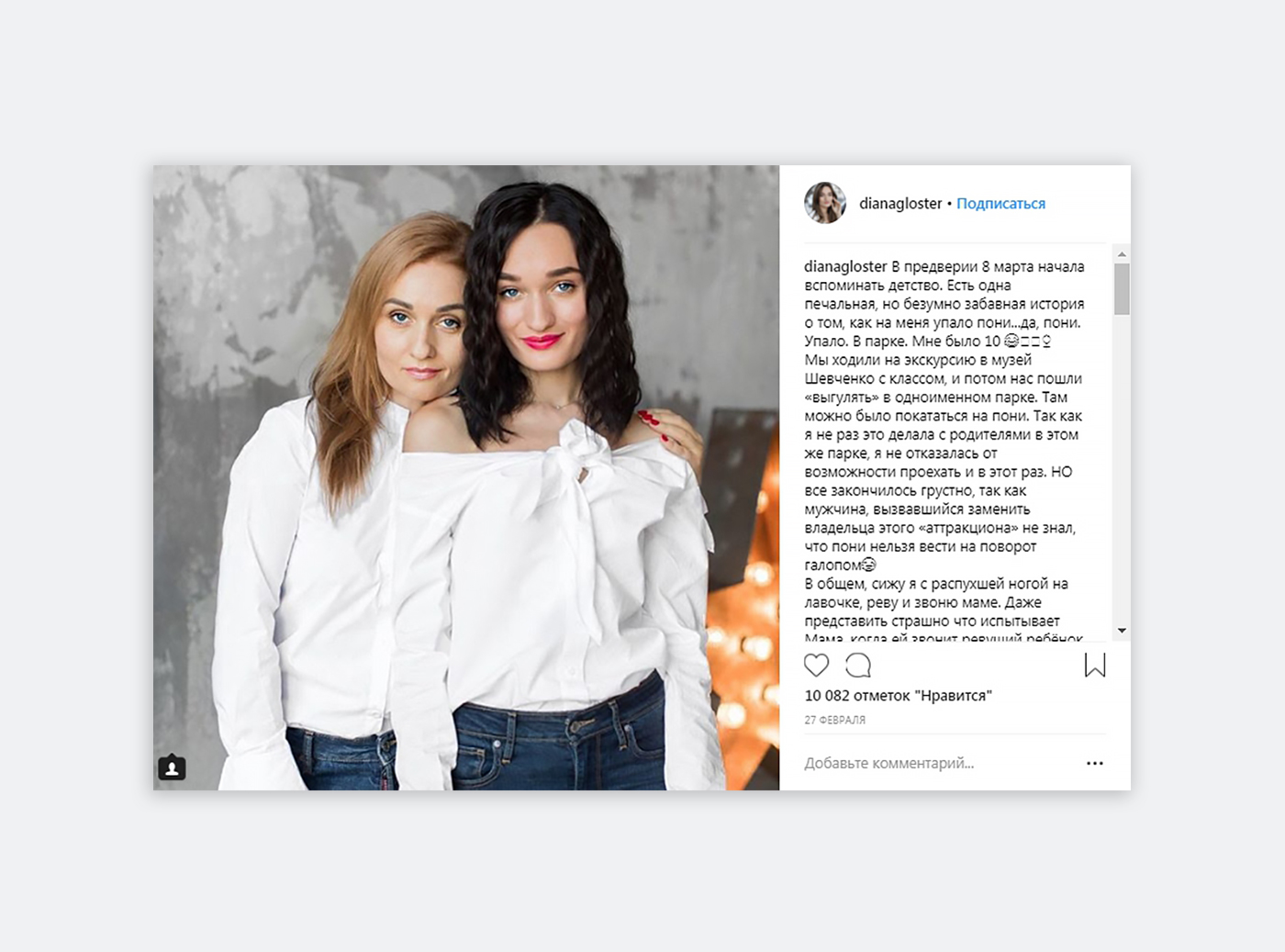 A team of top bloggers with Masha Timoshenko, Diana Gloster, Tania Parfilieva and Dasha Suvorova promoted the shining smile and healthy habits as a part of the Listrine #21dayswithListrine project.

They posted photos and shared their experience with Listerine and challenge results. This advertising campaign turn out to be highly effective: in 3 months the publications gained 145,000 likes and 2,150 comments altogether. 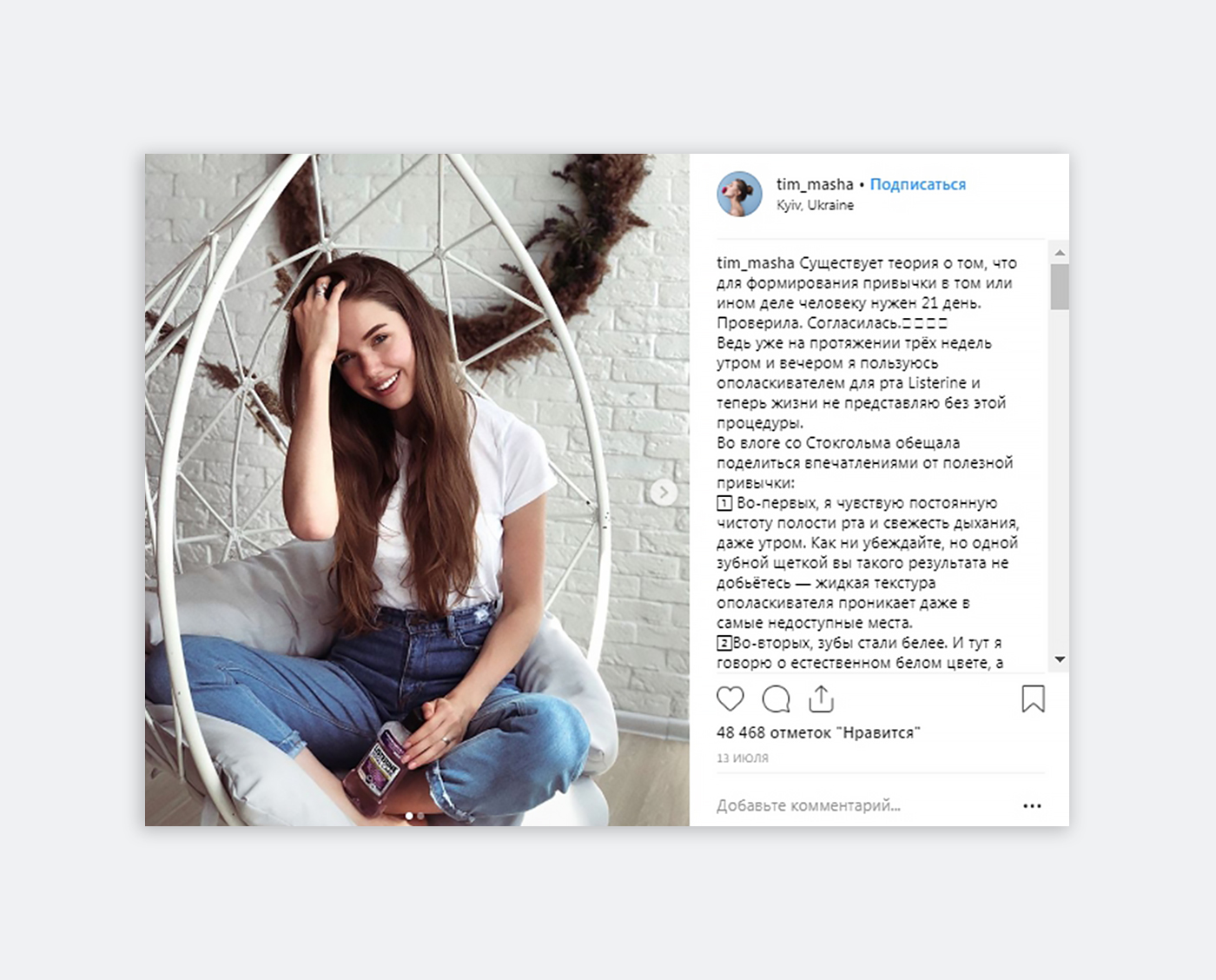 Fashion designer Andre Tan engaged 6 top bloggers in the launch of his new collection. They were Tania Parvilieva, Diana Gloster, Tania Prentkovich, Sofia Stuzhuk, Yana Stanishevska and Adnrei Trushkovski with total audience of 1.7 million followers. About 20,000 users viewed the video stream of a photo shoot at official designer’s page, while the bloggers shred backstage photos and videos in their stories. We will see result with time, what the crowd is wearing on the streets. 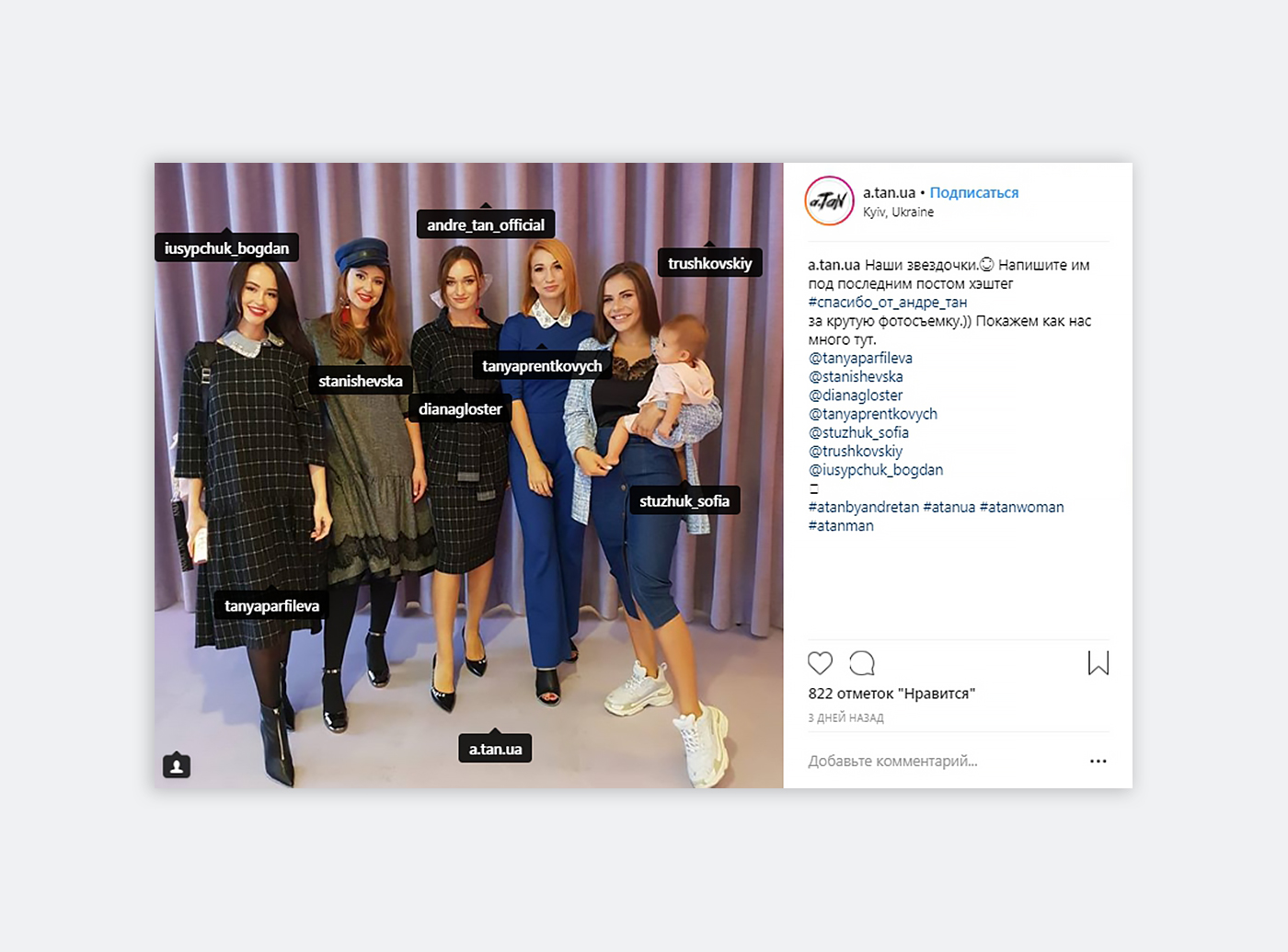 An the context of Style Hub project, Intertop made a video compilation of the stories of success of fashion celebrities. Bloggers like Andrei Trushkovski, Diana Gloster and Vlada Garmash tried on the shoes and shared fashion recommendations. 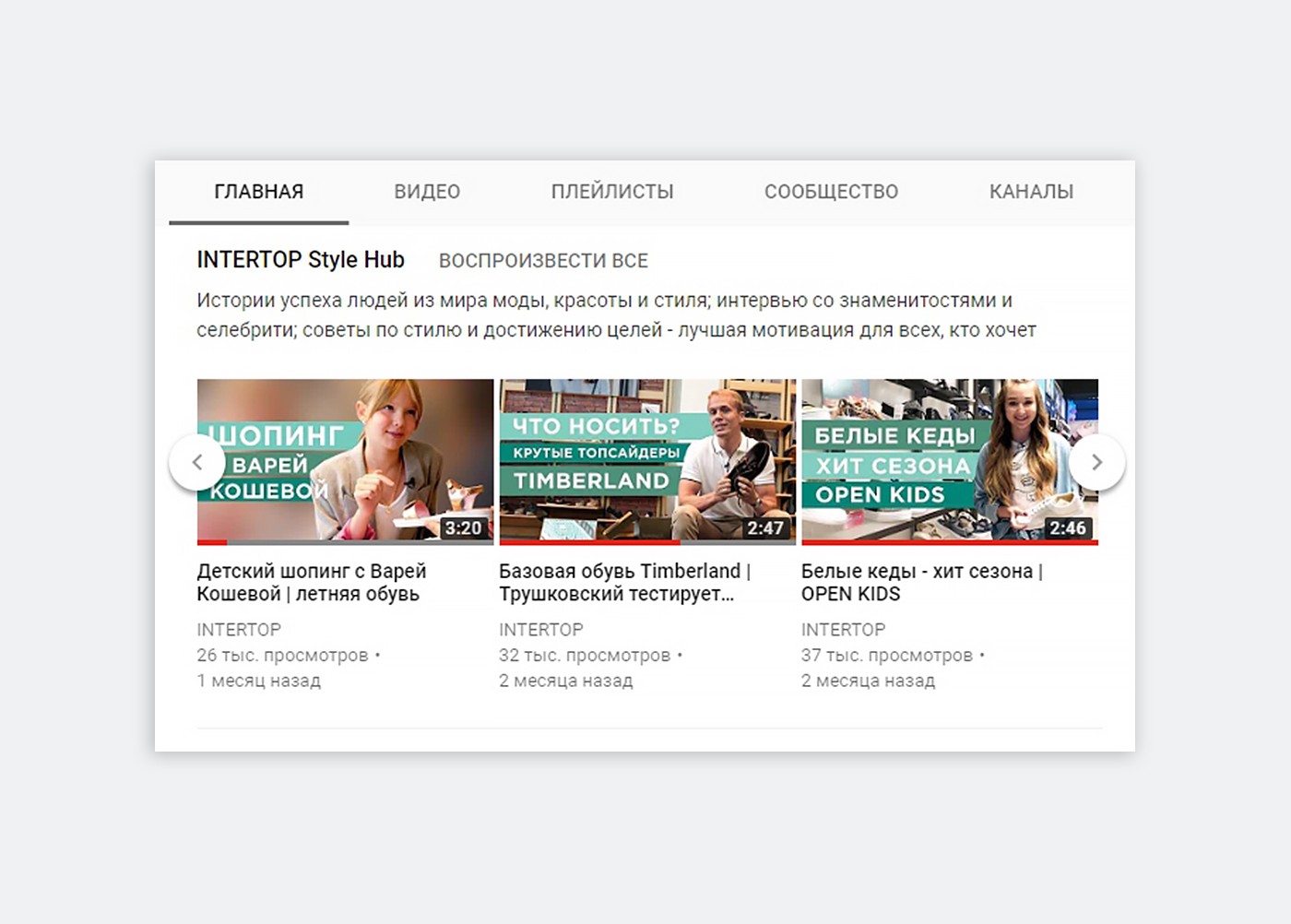 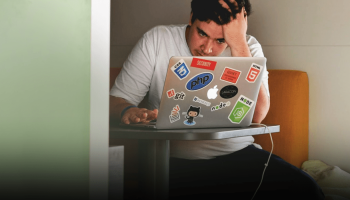 Контент-маркетинг,   Дизайн
Main mistakes with the main page of your website
Traditionally the main page embraces the most important information the website owner wants to present. Even when users make the first contact through the product page or other child page, the Main page is most likely to be the next one they will visit. Therefore, it is vital to know the possible pitfalls beforehand and avoid them at the stage of development. 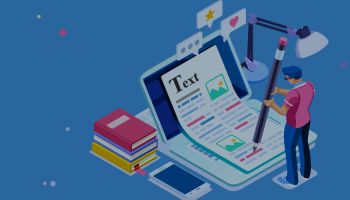 Контент-маркетинг,   SEO
Say ‘YES’ to the corporate blog!
Corporate blog is a section of a website which traditionally contains news and events of the company. It is usually quite boring and dull, but You can turn it into a really powerful promotion tool. You just need to know how to do that. 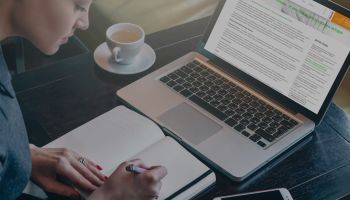 Контент-маркетинг,   SEO
Longread: advantages of large format
‘Longread’, ‘long story’, ‘deep story’, storytelling’ - there are many names for such format of presenting information online. Regardless of the name there is still an ongoing debate whether it is relevant and appropriate to use texts over 5,000-10,000 symbols as part of a website content. Is it true that users prefer nothing longer than posts at Facebook and would quit a 15 minute reading already after the first paragraph? Or maybe the longread still has its audience?
Start cooperation
Start cooperation
Your message has been sent successfully! We will contact you within one business day or sooner. You can also dial us by phone:
A lot of interesting things from BRAB in social networks!